Do not make the mistake of thinking only big dogs can cause dog bite injuries. 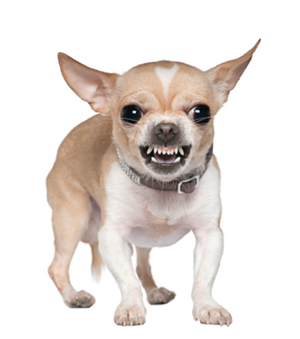 When it comes to dog bite injuries, most people think of big breeds like pit bulls, German Shepherds, Rottweilers, etc. Large, aggressive dogs can indeed cause serious injuries or even death, in part due to their strength and size. Just recently we had a case in southern California where a 63-year-old woman was mauled to death by four loose pit bulls while out jogging.

However, we have also had cases in the news about much smaller dogs terrorizing entire communities, such as the packs of Chihuahuas that have been roaming the streets of one Phoenix, Arizona neighborhood. The little dogs run in packs of 8 to 15 according to some residents, and are making parents afraid to let kids walk to school or play outside alone.

The truth is that any size dog has the potential to become aggressive and cause injury. The following 6 small dog breeds are considered especially prone to bad behavior, including aggression and biting. If you encounter any of these breeds, be especially careful to avoid provoking the dog in any way. Just go about your business and know that if the dog bites you through no fault of your own, you can hold the owner or handler legally responsible for your injuries with the help of an expert dog bite injury attorney.